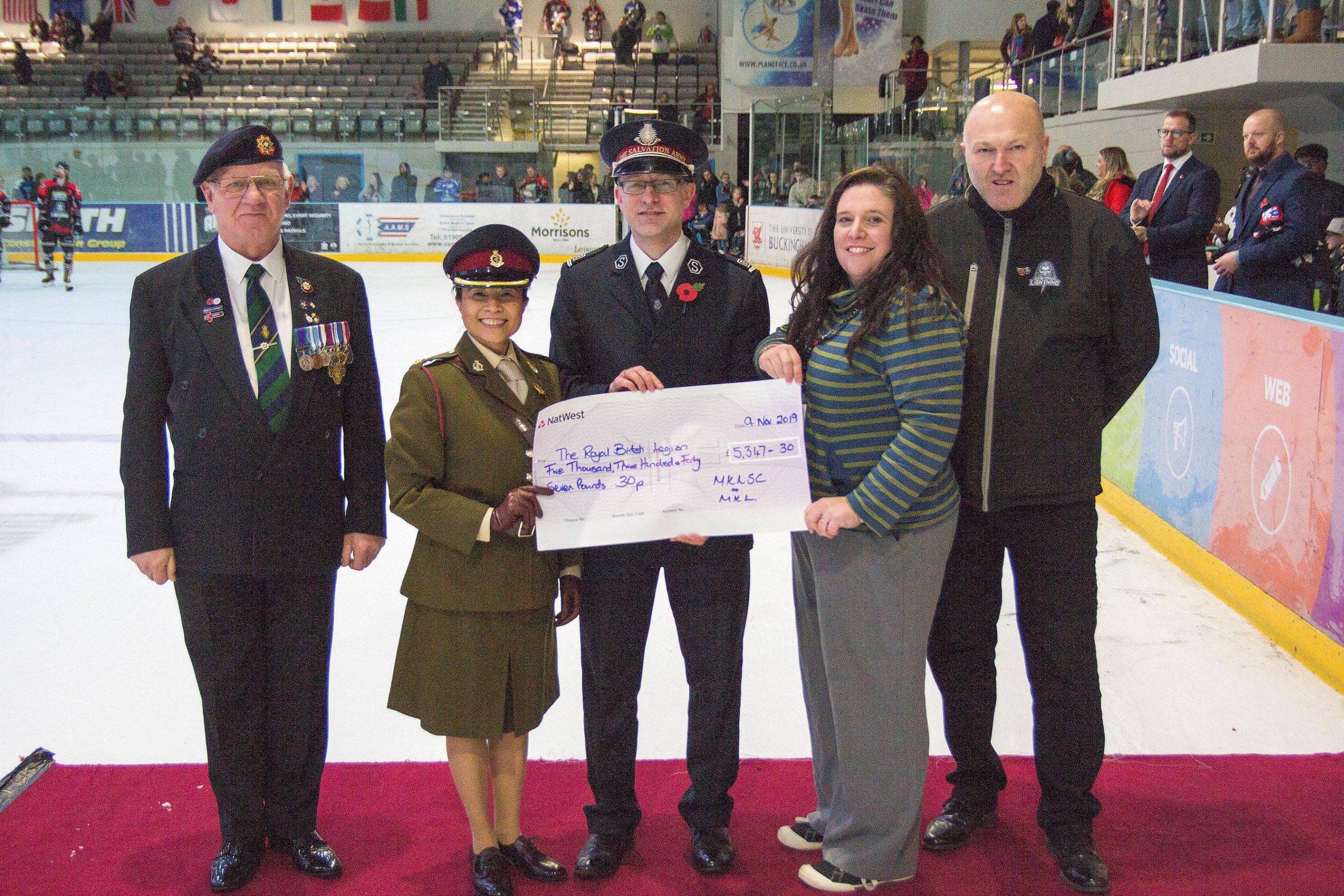 For the 7-2 victory over Bracknell Bees, the arena was awash with special, limited edition jerseys which were worn for the weekend only, and had been produced with a unique poppy design to reflect the British Legion’s well known appeal.  Game worn jerseys were purchased by fans as ‘Own and Loan’ items, and a run of replica jerseys was also produced and sold online.  The Supporters Club also ran fundraising activities at the game to further build support for the charity’s activities.  Overall, all profits from the jersey sales and fundraising were passed over to the Royal British Legion with a cheque presentation at the end of the night.

Earlier in the evening, there had been an impeccably observed 2 minutes silence following the playing of the Last Post by Kevin Dare, Bandmaster of the Milton Keynes Corps of the Salvation Army.  This was followed by a live performance of the National Anthem by Thao Nguyen who is a mezzo-soprano singer and is also a serving Officer in the Armed Forces.  She is a practicing General Practitioner in Milton Keynes specialising in veteran’s care.  Thao was presented with the donation cheque along with David Tomlinson, Vice Chairperson of the Jubilee Branch (left) from the Royal British Legion and Kevin Dare (centre) from the Salvation Army by Claire Eason-Bassett and Dave Bunyan.

Commenting on the event, MK Lightning CEO Claire said “It was wonderful for the club and the Supporters’ Club to work together to raise such an incredible amount for the Royal British Legion who do so much for those who are or have been in our Armed Forces.  It was a privilege to spend time with their representatives this evening, and we are humbled by the work they do, and the support they give.  I’d like to thank everyone who donated or bought a jersey.  Your support really does make a difference.”

Dave Bunyan, Chairman of the MK Lightning Supporters Club said “Once again the fans have given tremendous support to the Royal British Legion Poppy Appeal.  We’re delighted that this year the club has donated 100% of the profits of jersey sales and all the fundraising on the night to the charity and it was a real honour to handover the cheque with Claire on the night.  Working together, the Supporters Club and the Club have raised some really meaningful funds for this amazing cause.”