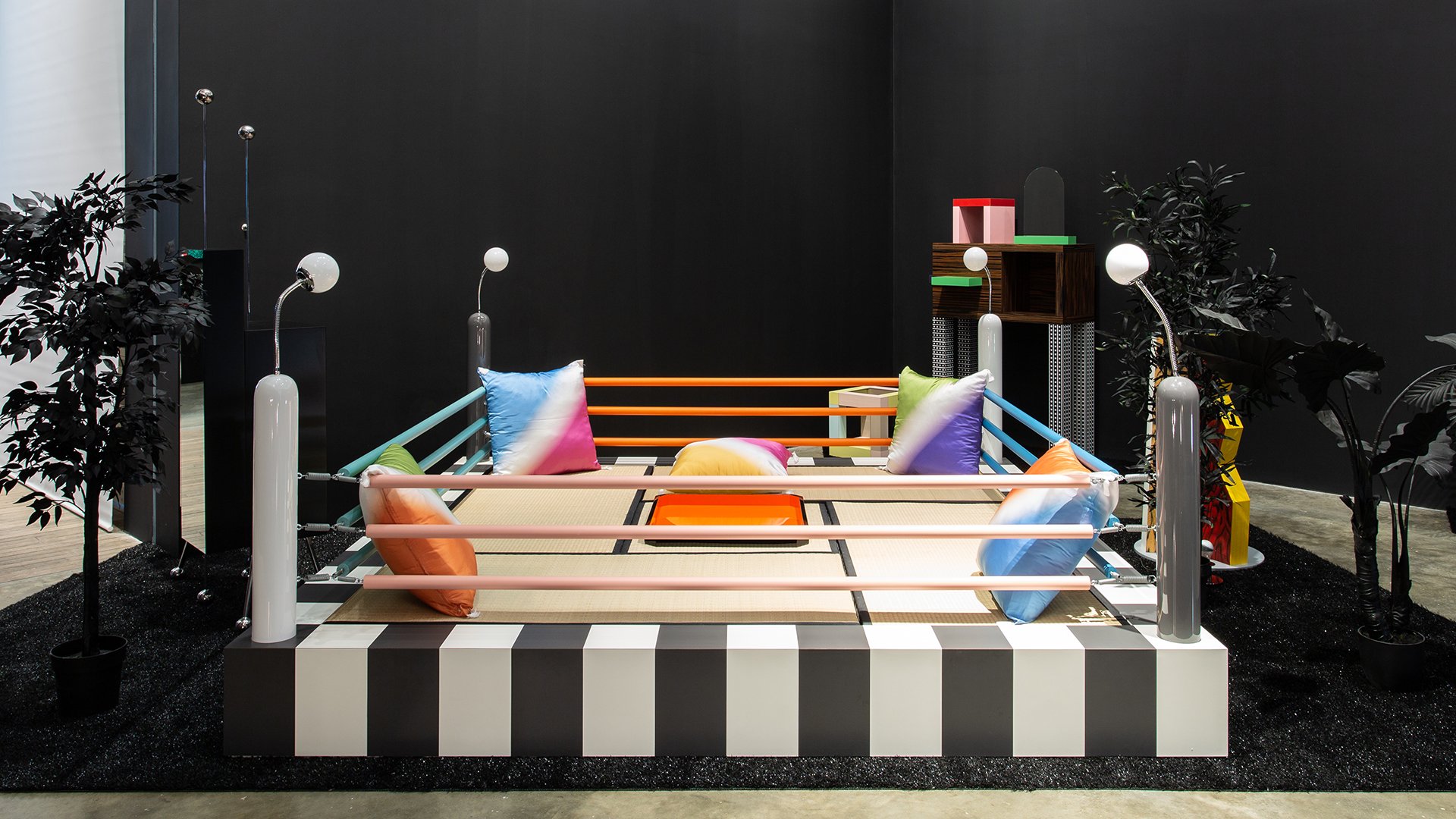 A major survey of the influential 80s design movement Memphis will go on show at MK Gallery in Milton Keynes this December. The exhibition, Memphis: Plastic Field (2 December 2020 – 24 April 2021), will explore the subversive and irreverent spirit of the Memphis Group, bringing together over 150 of the collective’s most significant works whose bold and playful aesthetic pushed boundaries and sparked a new era in international design.

Founded by Italian designer and architect Ettore Sottsass, Memphis brought together an international collective of young designers united in their desire to inject humour into the design world and shatter the codes of the 20th century. When the group debuted its first collection at Milan’s Salone del Mobile in 1981 it caused a sensation, breaking the rules of streamlined modernism and challenging notions of functionality and good taste.

Their furniture was colourful, kitsch and geometric, drawing on Pop Art, Bauhaus and Art Deco to create an entirely new aesthetic full of punch and vitality. The sensory quality of the object was prioritised over function. Materials like plastic laminate and Terrazzo, previously used in kitchens and bathrooms, were suddenly incorporated into high-end furniture, and monochrome patterns of graphic shapes and squiggly lines paired with vivid yellow became an instant Memphis trademark.

Their designs experienced limited commercial success and were derided by critics of the time for being impractical and expensive. Only a few devoted high-profile customers were able to buy designs in bulk, including David Bowie and Karl Lagerfeld, who furnished his Monte Carlo apartment with Sottsass’ first collection.

The movement was short lived, but its influence reached far beyond its active years to have a lasting cultural impact on fashion, art and design. Memphis: Plastic Field will celebrate the importance of the Memphis Group as a revolutionary moment in the history of design. In its rejection of the austerity of modernism Memphis became a significant part of pop culture, becoming synonymous with both the boundary-pushing postmodernism and garish appeal of the 1980s. Its signature clash of bright colours and synthetic materials pervaded every aspect of 80s popular culture, from the unmistakable aesthetic of TV shows like Saved by the Bell and Miami Vice to MTV graphics.

Anthony Spira, Director of MK Gallery, said: “The Memphis Group dreamt of shattering the codes of the 20th century. Their vision was to drop a bomb on the rules of design and to renew the language of shapes and colours that make up our environment. As a result, Memphis changed the course of design, fashion, architecture, music and film. Founding Memphis member Martine Bedin wrote: “The same obsession always; can we imagine a new world by drawing another chair, another table, another light, another vase.” Following this call to action to ‘imagine a new world’, the Memphis group invites us to reconsider, reinvent, and rebuild a new visual language for the future”.Memphis: Plastic Field at MK Gallery is a reinterpretation of the exhibition shown at the The Museum of Decorative Arts and Design, Bordeaux 21 June 2019 to 05 January 2020 and Fondazione Berengo – Palazzo Franchetti, Venice 24 May to 25 November 2018. The exhibition is produced in partnership with Memphis srl, Milano with exhibition design by IB Studio, Milan (Architects Isabella Invernizzi & Beatrice Bonzanigo).

With thanks to the Memphis Exhibition Circle including Oscar Humphries and those who wish to remain anonymous.