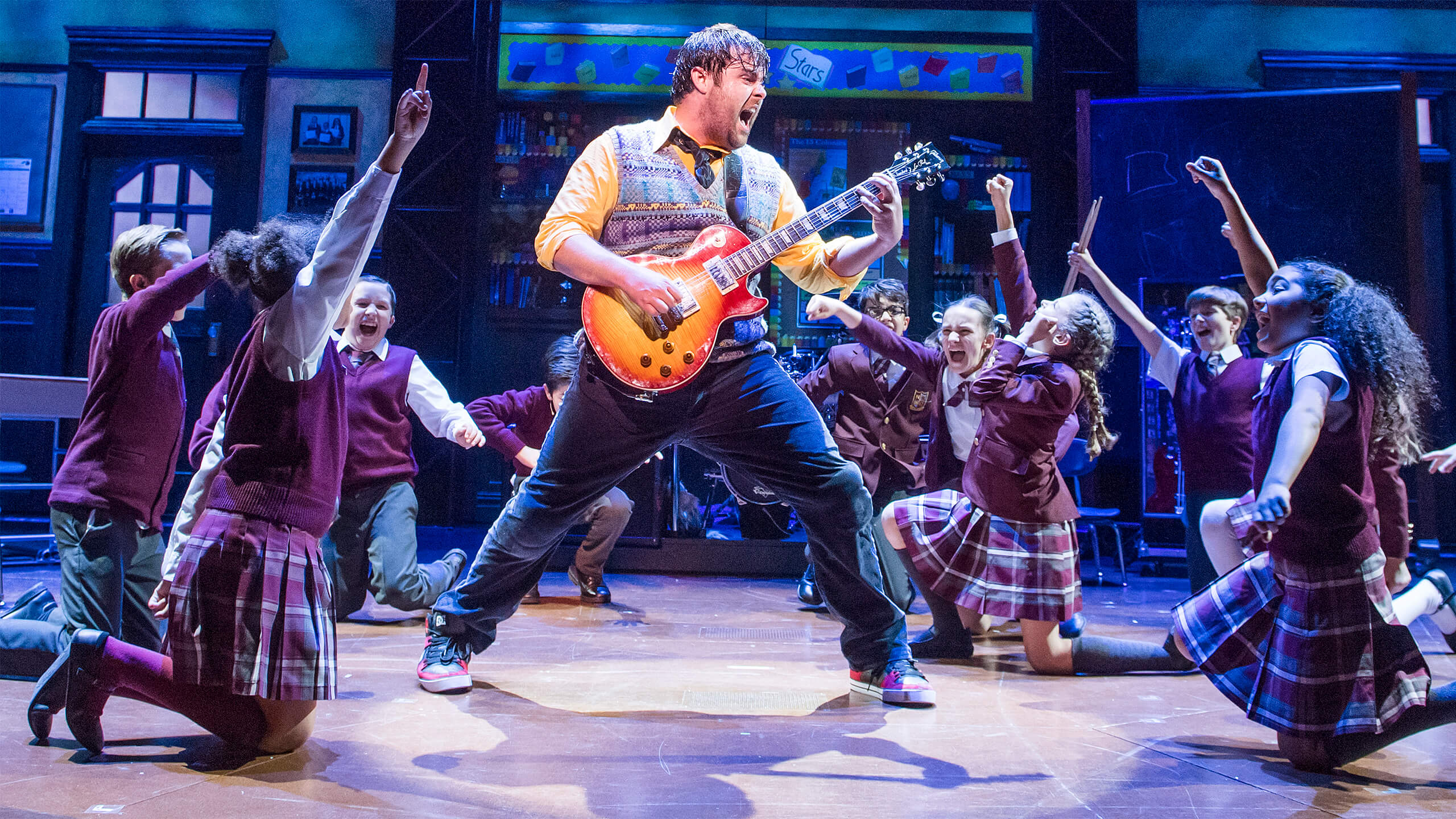 Interview with School of Rock cast

They say never work with children or animals, but the adult cast and creatives of School of Rock are thrilled to be sharing the stage with so many talented youngsters.

“They are so inspiring to a new generation,” raves Jake Sharp, who stars as renegade music teacher Dewey Finn in the first ever UK and Ireland touring production of Andrew Lloyd Webber’s smash hit musical.

“Lots of them have previously come to see the show and now they’re in it. The energy that they bring, the natural energy that young people have, is amazing and it’s a complete pleasure being on stage with them. It keeps the show real and raw all the time.”

Having previously played Dewey in the West End, the actor also feels School of Rock is the perfect show for right now. “It’s completely joyous,” he says. “It’s inclusive, positive and optimistic, which is what we all need after everything we’ve been through recently.”

Based on the 2003 film starring Jack Black, the Olivier Award-winning musical follows wannabe rockstar Dewey as he poses as a substitute teacher at the prestigious Horace Green School and transforms a diverse bunch of students into a brilliant rock band – with three musical numbers from the film featured alongside 14 original Lloyd Webber compositions.

The cast features 19 adults, including four principals, and 12 youngsters rocking out at each performance – with the latter rotating across the tour and standbys always waiting in the wings, hence those 42 children on the roster. And the young rockers play all their own instruments completely live, highlighting Lloyd Webber’s passion about music in general and how it enriches the young in particular.

Assembling the young cast for the UK and Ireland tour was a lengthy process. Because of COVID restrictions they were asked to send in video footage followed by Zoom auditions. Then when restrictions were lifted there were in-person sessions.

Associate director Chris Keys, who has been with the show since it opened in London, notes: “You have to look a bit outside the box for this show. It’s not your usual stage school kids. Once you’ve seen they can play the instruments you have to nurture the other aspects that are required – the singing, the acting and the movement. It throws up all sorts of challenges but at the same time it’s so rewarding when you see the children make such huge strides from the first day of rehearsals to opening in the show.”

Rebecca Lock, who plays school principal and Dewey’s eventual love interest Rosalie Mullins, is excited to be performing again. “Having been stuck in the house for God knows how long, to be able to see other places and different faces is incredible. You count your blessings every day. And audiences really are loving it. I’ve seen people in the street after the show and they’re almost tearful, going ‘We’ve needed this so much’.”

Joan Cusack starred as Rosalie in the film, but Rebecca isn’t daunted about following in the footsteps of a comedy legend. “The character is slightly different. Joan was really kooky whereas my Rosalie is a bit more of a sergeant major.” She laughs. “But as a lover of the film and her in it, of course I’m going to steal all of Joan’s best bits!”

The actress is a musical theatre stalwart with a CV that includes Mary Poppins, The Phantom of the Opera, Heathers and Curtains. She’s particularly taken with School of Rock because: “It’s wonderful being surrounded by all these talented children. Just seeing them pick up their instruments in rehearsals and be brilliant was mind-blowing. It’s a great showcase for all that young talent and it’s such a heartwarming story, not to mention really funny. There’s a love story in there too. It has something for everybody.”

School of Rock plays at Milton Keynes Theatre from Tuesday 8 to Saturday 12 February. Tickets are available at ATGTICKETS.COM/MiltonKeynes