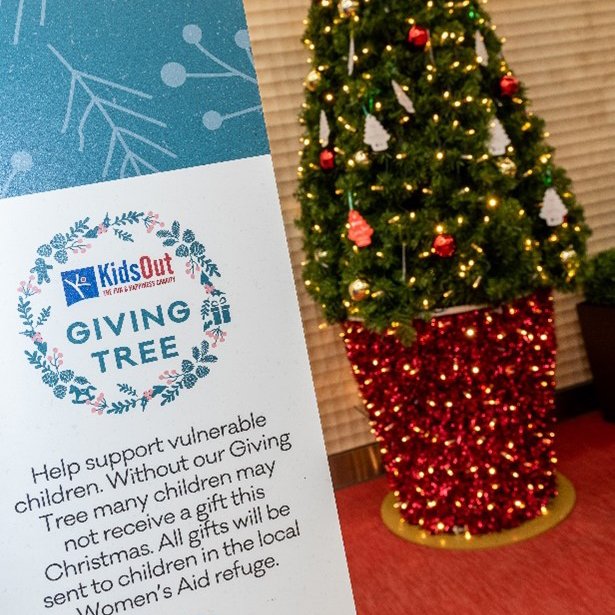 centre:mk has set a target of 1000 gift donations from shoppers as part of its Giving Tree initiative this Christmas for local charity, KidsOut.

KidsOut, who are based locally in Leighton Buzzard, support over 70,000 disadvantaged children annually across the UK, most of whom have escaped serious domestic violence.

Last year centre:mk’s shoppers generously donated over 700 presents as part of the Giving Tree scheme which works by visitors collecting a decorative gift tag from the shopping centre’s Guest Services area which features a child’s first name, age and ideal gift (between £5 and £20) which can then be purchased and handed back to the Guest services team. The drop-off deadline for gifts is the 19th December and the charity ask that all gifts are left unwrapped. The initiative, which is now in it’s second year at centre:mk, ensures that children in refuges across the UK receive Christmas presents, without which they would mostly receive nothing.

Kevin Duffy, Director of centre:mk commented “Most of the children and mums have escaped serious domestic violence and arrive in a refuge, often with nothing but the clothes on their backs. Without KidsOut’s support most of them would not receive a present at all this Christmas. Our guests gave so generously to the Giving Tree last year and we’re quite confident that the 1000 gift target this year can be met before 19th December.”

Last Christmas, KidsOut distributed 5,448 toy boxes as part of the Giving Tree initiative to children in refuge across the UK and a further 22,000 toys were provided to children that had fled domestic violence and found sanctuary in a safe house.

Find out more about the KidsOut charity