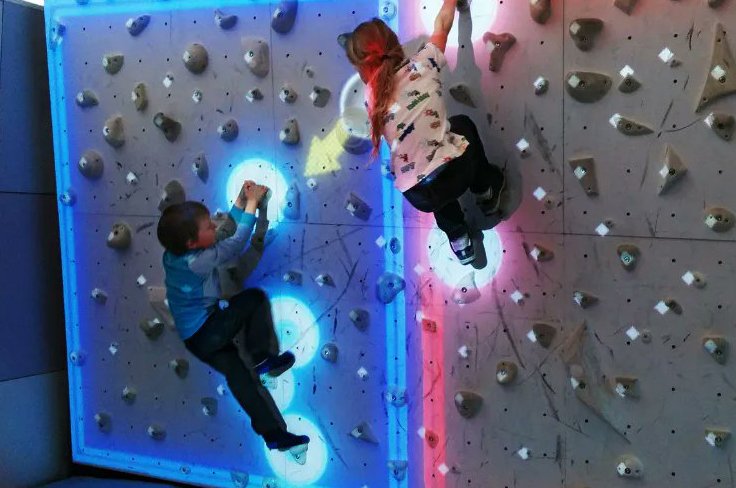 Climb Quest Milton Keynes has a new challenge that everyone is in a buzz about! ValoClimb has been installed on the mezzanine level above the café within the climbing centre. An augmented reality climbing wall, ValoClimb is where computer gaming meets rock climbing! You must see it to believe it.

ValoClimb is an award-winning augmented climbing wall, it is the world’s first interactive climbing game system. The climbing wall features several interactive games with different levels and modes of play. You can challenge yourself or take on a friend or family member in a head-to-head competition.

“We are so excited to have this new challenge installed here at Climb Quest” says owner and MD Chris Walthew. “It is proving hard to keep the staff off the wall though as they all love it and then their competitive edge comes out. They now have a leader board to see who is the quickest at Flash, a Speed Climbing game. I am going to have to get more practise in!”

Experienced climbers can try out different climbing techniques to improve balance, strength, and agility. While novices can compete against a friend to have fun via an interactive game. Try out Whack-A-Bat, Astromania, or Climball.

ValoClimb is a low-level climbing wall with an overhead projector that transforms the climbing wall into a technical challenging climb or an arcade game by projecting graphics onto the wall that track your movements. The system can be adjusted according to the height of the user so both adults and kids can have the most amazing time.

“A really clever feature of the wall is you get a Selfie-Video. The system will record you on the wall which you can then share with your friends and family or via social media,” says Sam, the Centre manager. “You are also able to record your scores and look to beat them the next time you come to Climb Quest. It’s surprising how challenging it can be as each game has different levels that you progress through, it is a great workout.”

The system is easy to use, the hardest bit is deciding which game you want to try and if you are going to compete against someone else.

If you are passing the Centre, then why not pop in and see what all the hype is about. One of the instructors will be more than happy to give you a demonstration or just come and give it a go yourself, we can’t promise you won’t get hooked though!

For more information about Climb Quest and the other 20 + climbing challenges they have or to book a session head to:
climbquest.co.uk