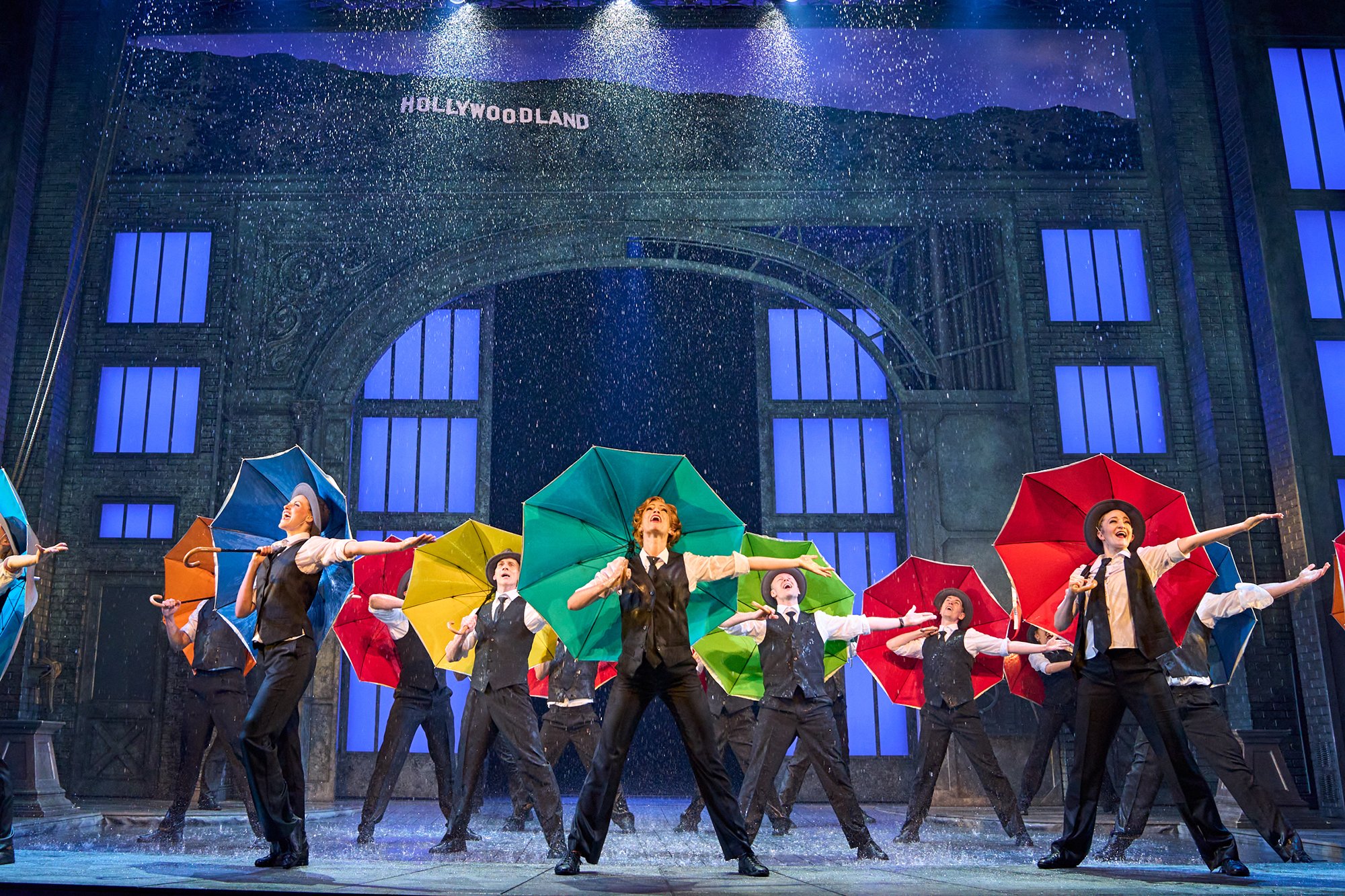 Q&A with Singin’ in the Rain star Sam Lips

Dancing and singing in the rain every night is a dream come true for Sam Lips. Taking on a character made famous by Gene Kelly in the 1952 film Singin’ in the Rain, the actor says of getting to star in the stage version of the iconic musical: “It’s a huge honour. I grew up watching MGM musicals, imagining that one day I’d be following in the footsteps of guys like him. The fact that it’s now happening is pretty incredible.”

In the UK and Ireland tour of the Chichester Festival Theatre and Stage Entertainment production directed by Jonathan Church, Sam plays Don Lockwood – a huge star in 1920s Hollywood who is suddenly tasked with helping turn silent movie The Duelling Cavalier into a talkie. Trouble is, his co-star Lina Lamont has a terrible speaking voice and she and Don have been playing the happy couple to appease the publicity department, which complicates his burgeoning romance with chorus girl Kathy Selden.

“It’s a big role, with so much singing and dancing and physicality,” says Sam, who was in the ensemble at Sadler’s Wells in London where the show wowed audiences last summer as well as in the subsequent Tokyo run. “But I’m happy to rise to that challenge and it’s the show people need right now. This sort of escapism in such a happy show is just what we need given the dark times we’ve been through. It brings so much joy into people’s lives.”

Directed and choreographed by Kelly and legendary director Stanley Donen (whose other screen musical credits include On the Town and Seven Brides for Seven Brothers) the film version was surprisingly not the huge hit its iconic status suggests, raking in a respectable but not blockbusting $7.2 million against a $2.54 million budget.

Most critics loved it but it was only up for a couple of Oscars (for Best Supporting Actress and Best Scoring of a Musical Picture) and the only major award it bagged was a Golden Globe for Donald O’Connor. Time has been kind to the movie, though, with many film historians citing it as the greatest screen musical ever and it is currently ranked fifth on the American Film Institute’s list of the 100 best films.

Sticking faithfully to the original story but including a few additional songs, the stage musical premiered at the London Palladium in 1983, was directed by and starred Tommy Steele and ran for nearly two years. It opened on Broadway in 1985 and returned to the West End in 1989 with Broadway star Don Correia.

In the 90s Paul Nicholas took it on tour around the UK and there were revivals in 2000 at the National Theatre and 2004 at Sadler’s Wells, the latter of which featured Adam Cooper in the lead as well as on duty as choreographer. Adam went on to play Don again at Chichester Festival Theatre in 2011 and in the West End in 2012, returning to the show at Sadler’s Wells last year ahead of this year’s UK and Ireland tour.

Cooper is making guest appearances on a few of the tour dates, as is Faye Tozer of Steps fame as Lina Lamont and Kevin Clifton as Don’s comedy sidekick Cosmo Brown. But the bulk of the tour is being done by Sam alongside Charlotte Gooch as Kathy, Ross McLaren as Cosmo and Jenny Gayner as Lina.

It marks Sam’s second leading role on a UK stage after he was Scott Hastings in Strictly Ballroom at the West Yorkshire Playhouse in Leeds in 2016. But the native of Denver, Colorado, has extensive theatre experience in his homeland and is looking forward to getting to know the UK better, saying: “I can’t wait to explore all these new places and bring this wonderful show to audiences around the country. I hope when they leave the theatre they’ll feel uplifted and happy and that they have a big smile on their faces.”

He’s also relishing splashing the front rows during the spectacular title number in which 6,000 litres of water rain down on the stage. (The water is heated and during the interval it is drained, recycled and cleaned for reuse.) “It’s tremendous fun,” Sam says, adding with a laugh: “I’ve taken a couple of tumbles but I’m getting better at it.”

Charlotte Gooch is back as Kathy, having played the aspiring starlet in London and Japan, and she agrees Singin’ in the Rain is the perfect tonic for troubled times. “It’s nice to have some old-school musical escapism,” says the actress who hails from Godalming in Surrey. “It gives everyone a nice, joyous feeling for a couple of hours and an escape from the darkness that is the outside world right now. It’s romance, it’s comedy and there’s a happy ending.”

Having previously appeared in Flashdance, Top Hat and Dirty Dancing, Charlotte adds: “It’s all-singing, all-dancing, all-acting, and Kathy is such a joyful character. Everything about her is cheeky, loveable and wholesome and I love bringing all that to life.”

Asked to name a favourite number in the show, she cites Good Morning. “We have so much fun,” she says of goofing around with Sam and Ross. “We’re meant to be playing and bantering with each other, and we genuinely are. I also love the encore in which we all get to splash around in the water. I still have moments where I’m thinking ‘It’s raining! Inside a theatre!’ Who normally gets to do that for a living?”

Lincolnshire’s Ross McLaren was in the ensemble in a Paris production of the show and played Cosmo in Japan. Humbly classing himself as a Jack of all trades and a master of none, he says: “You have to be able to sing, dance and act and really rise to the occasion. He’s a comic character with so many brilliant lines, he does full-out dances and full-out harmonies. I have to bring my A game.”

Ross’s previous musical theatre credits include Sleepless, Big The Musical and White Christmas but, having been in Doctors on TV for the past year and a half, he adds: “It was a bit of a shock to the system to get back into dance. I’ve danced since I was four but I was out of practice.”

As for taking on a role that Donald O’Connor played to comedy perfection in the film, he admits: “Gene Kelly said O’Connor was the best comic actor he’d ever worked with and that’s a touch act to follow. I’m rewatching the film and learning from him, and it was great to see Kevin Clifton’s take on the role too. You have to put a lot of yourself into so I’m bringing my own take to it as well.”