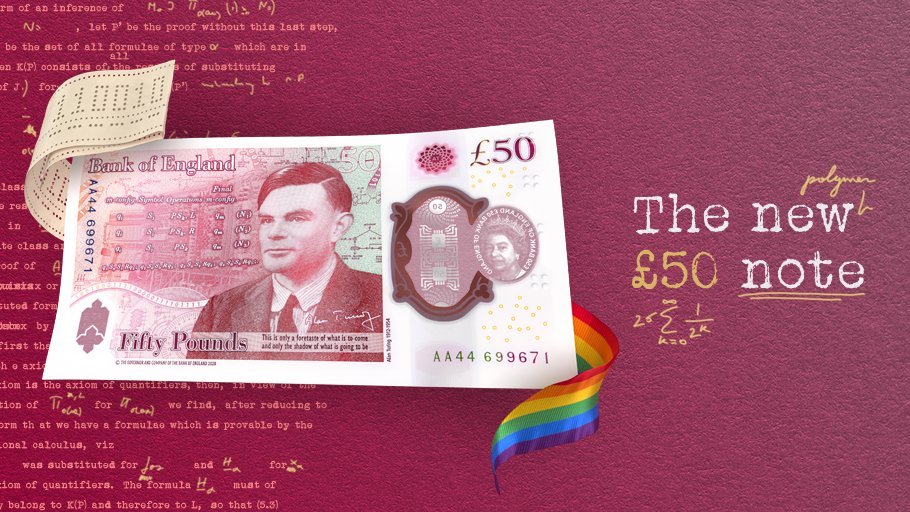 The design of the Bank of England’s new £50 note, featuring Bletchley Park Codebreaker, Alan Turing, has been revealed.

It includes technical drawings for the British Bombe, the machine specified by Turing and one of the primary tools used to break Enigma-enciphered messages. Plus his signature from the visitor’s book at Max Newman’s House in 1947, which is on display in our Alan Turing display in Block B. You can find out more about Alan Turing’s important work at Bletchley Park in his Roll of Honour entry and our Alan Turing FAQ below.

Turing was revealed as the character for the £50 note in July 2019. The new note will enter circulation on 23 June 2021, to coincide with what would have been his birthday. Alan Turing was chosen following the Bank’s character selection process including advice from scientific experts.

In 2018, the Banknote Character Advisory Committee chose to celebrate the field of science on the £50 note and this was followed by a six week public nomination period. The Bank received a total of 227,299 nominations, covering 989 eligible characters. The Committee considered all the nominations before deciding on a shortlist of 12 options, which were put to the then Governor Mark Carney for him to make the final decision.

Today, Turing is probably one of the most well-known Bletchley Park Codebreakers, and is also renowned as a computer science pioneer. He is also known to many as an LGBTQ+ icon for his arrest and conviction for ‘gross indecency’ in 1952 for having a relationship with another man. As an alternative to prison, Turing took hormone treatment. He committed suicide in 1954. He was given a posthumous pardon in 2013.

Find out more about the new £50 note in this Bank of England news story.