Gloria and Emilio Estefan bring On Your Feet to MK! - Destination Milton Keynes

Home / News / Gloria and Emilio Estefan bring On Your Feet to MK! 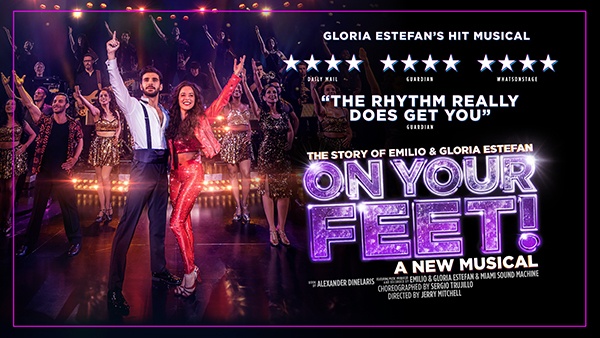 Gloria and Emilio Estefan bring On Your Feet to MK!

‘Give me your tired, your poor, your huddled masses yearning to breathe free…’

Ah, how times have changed. It’s not so easy to set up home in the United States of America these days if you’re trying to escape poverty and political meltdown in your country of birth.

But back in 1960, when their little daughter Gloria was just two years old, Jose Farjado, who had been imprisoned after the revolution in Cuba, and his wife, also called Gloria, managed to flee the country and start a new life in Miami. And that, for Gloria, the daughter of Cuban immigrants, was the start of her realisation of the American Dream.

On Your Feet! is the true story of how a shy young singer became the most successful Latin crossover performer in the history of pop music selling over 100 million records along the way. But it’s also an inspiring love story. Because, almost 45 years since they first met and after 40 years of marriage, Emilio Estefan, the man who encouraged her and was so ambitious for her, is still by her side.

In addition to 38 number one hits, Gloria recorded the Oscar-nominated song ‘Music of My Heart’ and has received numerous honours and awards over the course of her illustrious career. In 1975, Emilio Estefan invited Gloria to join the pioneering Miami Sound Machine of which he was a founding member. The band became celebrated for fusing infectious Cuban rhythms with American pop and disco.  Combined, they have won a staggering 26 Grammy awards.

But it wasn’t always easy.  Originally confined to Spanish speaking venues and radio stations Gloria and Emilio’s journey progresses from its origins in Cuba onto the streets of Miami and finally to international superstardom. But along the way Gloria was involved in an horrific bus accident and she and Emilio found themselves facing the possibility that she would never walk again.