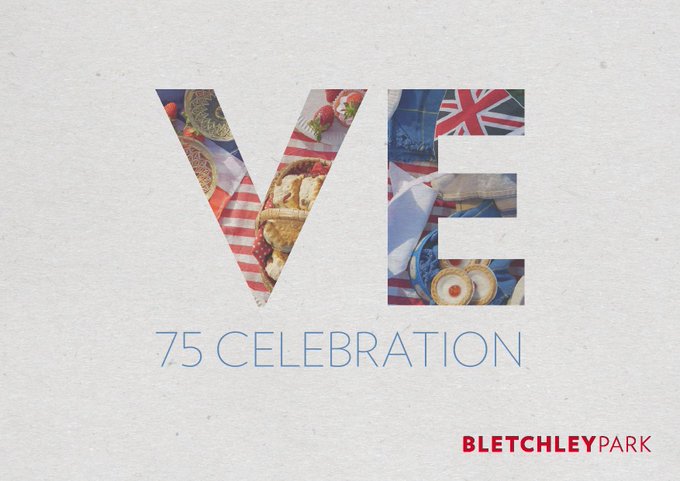 Find out how to celebrate VE Day 75 at home…

On the morning of 8 May 1945, a national holiday for ‘Victory in Europe Day’ was declared in Britain, Churchill had gained assurances from the Ministry of Food that there were enough beer supplies in the capital and the Board of Trade announced that people could purchase red, white and blue bunting without using ration coupons. Street parties were held across Britain with bunting lining the streets.

By spring 1945, almost 9,000 people were working at Bletchley Park and its Outstations. Bletchley Park was one of the first organisations to learn of the formal surrender of Germany in the early hours of 7 May 1945, the day before VE Day was formally announced on 8 May 1945. Although VE Day signalled the end of the war in Europe, the war in the Pacific continued, until VJ Day on 15 August 1945.

Many staff who’d been working on German codes and ciphers joined the Bletchley Park team’s working on Japanese codes, whilst some of the secret listeners who’d been intercepting German messages were given the option to transfer to the Pacific. Staff were also involved in winding down Bletchley Park as a war station. This included the dismantling of Bombe and Colossus machines, innovative technology developed by the Codebreakers to help speed up the decryption of enemy messages.

On Friday 8 May 2020 Bletchley Park will be marking the 75th anniversary of VE Day online with a digital ‘Nation’s Toast’ at 3pm, and a special recording of a VE Day speech by ‘Prime Minister Sir Winston Churchill’.

There are many ways to join our celebrations and their celebration pack should give you a few ideas on how to celebrate with them at home. Remember to share your photos and videos of your activities and celebrations with them using #BletchleyParkVEDay75 and find out how you can be part of the celebration film in the activity pack.

Bletchley Park need YOU to help create 1,945 metres of red, white and blue bunting to celebrate VE Day! They want you to adorn your houses and streets with bunting on 8 May. Then, once the site is reopen to the public, they are asking you to send Bletchley Park your bunting so they can create a real celebration atmosphere when they open.