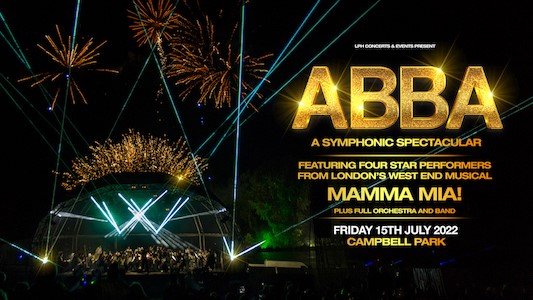 Star performers from the London West End production of Mamma Mia! will take to the stage at Campbell Park in Milton Keynes on Friday 15th July, backed by a stunning, full rock band, together with the Heart of England Orchestra. The result is a breathtaking concert of ABBA’s greatest hits, delivered on an epic scale. This unmissable show captures the magic of ABBA’s music and is guaranteed to have the crowds on their feet, dancing and singing along to some of the biggest and best loved tunes ever released. Friends and families can enjoy picnics and fun in this spectacular outdoors celebration of ABBA.

Early bird tickets are available at just £26 (£10 for children 5 – 16) and go on general sale from 10am on 24th February via www.lphconcertsandevents.co.uk.

ABBA are one of the most influential pop super-groups of all time. The popularity of their songs has continued through the decades and through the smash hit musical Mamma Mia! The musical was turned into a film which also became a global box office sensation. ABBA returned with a new album ‘Voyage’ at the end of 2021, their first new material for 40 years, and debuted at no.1 on album charts in 18 countries, including the UK, selling over a million copies in its first week – underlining the global obsession with ABBA and their music.

ABBA Symphonic at Campbell Park in Milton Keynes promises everything any ABBA fan could want. West End stars, Rob Fowler and Sharon Sexton will be joined by two other incredible performers, soon to be announced, all of whom have sung the classic ABBA songs to thousands of people during their time in Mamma Mia! ABBA Symphonic will give them the opportunity to perform them again on a grand scale like never before. ABBA fans can bring picnics and goodies, chairs and blankets and get ready for an uplifting evening of entertainment where they are guaranteed to hear favourites including ‘Waterloo’, ‘Gimme Gimme Gimme’, ‘SOS’, ‘Super Trouper’, ‘Fernando’, ‘Dancing Queen’ and many more from 25 much-loved tracks.

ABBA Symphonic is arranged and conducted by Steve Sidwell. This huge talent is a Grammy Award winner as well as receiving nominations for Tony and Olivier Awards. He has a diverse list of credits which includes the orchestration and conducting of Robbie William’s platinum-selling albums, ‘Swing Both Ways’ and ‘Swing When You’re Winning’, the Olympic Games Closing Ceremony, Children in Need Rocks The Albert Hall and many more. His unique take on ABBA’s finest tracks will prove to be a show to remember.