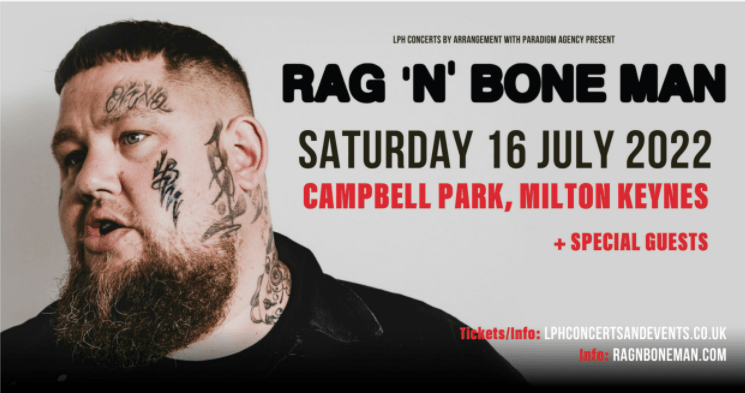 Rory Graham, aka Rag‘n’Bone Man, is an English singer-songwriter known for his baritone voice and No 1 albums. He won the 2017 BRIT’s ‘British Breakthrough Act’ and 2018 BRIT's 'British Single’ for the title track of number one album, Human. The album earned Rory sell-out tours and festival appearances around the world. At the 2020 Ivor Novello awards, Rag’n’Bone Man scored the award for Music Most Performed Work with his hit ‘Giant’ with Calvin Harris.

His 2021 sophomore album, ‘Life by Misadventure’ ,released May 2021, debuted at number one and was preceded by two singles: "All You Ever Wanted" and "Anywhere Away from Here", a duet with American singer Pink.

This exciting concert has a great lineup which will also see performances from Jade Bird and Charlotte Jane.